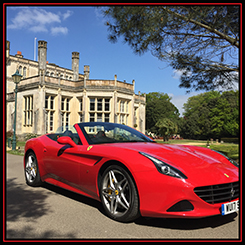 Supercars and Artisan Food Adventure in the New Forest

I recently enjoyed a rare break from the shop and the commercial world of Alf Turner burgers and sausages to hit the road with my mates Tom Howard (@GentlemanRacing) and Andy from Red Letter Days (@RLDAndy) - in the luxury of some rather nice supercars. To make it even more interesting we joined a film crew as they filmed a program all about artisan food producers of Hampshire. As the filming was for a TV pilot and despite it being shot by a legendary, Oscar winning producer, I am not allowed to reveal anymore (yet)...

The New Forest is obviously a stunning location and just a stone’s throw from my hometown of Aldershot. However, it’s a million miles from the everyday life of a butcher where ponies, cattle, donkeys and deer roam free. It’s also hard not to fall in love with the forest’s idyllic glades, ancient woodland and open moors - especially when you’re driving a Ferrari California T! This was my very own carriage for a couple of days. Wow. Whether you're following the California, out of sight but well in earshot, or sat in the driver's seat, it's a very special place to be and, as a man with a soft spot for horse power, I got comfortable with ‘her’ surprisingly quickly. However, all good things come to an end so I had to make the most of this £200k Ferrari for the few days I had ‘her’ for before handing the keys back to the incredibly generous guys at Bespokes (www.bespokes.co.uk), who very kindly leant us the car for this adventure. So, make the most of it I did! In convoy with Andy and Tom (in a McLaren MP4-V and Porsche GTS) we set off with the film crew to visit some incredible places and meet some amazing people including Laverstoke Park (owned by the famous ex F1 champion and Ferrari driver Jody Scheckter), Hattingley Valley Wines, Winchester Distillery, Hampshire Cheeses, The Watercress Company and their ‘secret’ wasabi farm, The Shipyard Fish Market in Lymington and Chalk Stream Trout; which all culminated with a simply sublime meal, served up by Head Chef Luke Matthews in The Kitchen at Chewton Glen. I could go on about all the mouth-watering details, the open road (in my drop top in the baking sun!), the honour of being behind the scenes with such a slick and professional film crew, all the passionate producers and their fascinating stories, but it’s BBQ season, the heat wave continues and I do really need to get back to the working on meeting the overwhelming demand for my new Chuck n’ Rib Burgers! So, this is just a little taster in to my exciting and delicious weekend and a big thank you to all those that made this possible, especially Bespokes and the film crew (you know who you are - mum’s the word!). Thank you!

For the entire range of vehicles and driving experiences on offer from Bespokes, just check out www.bespokes.co.uk, and for more information about the producers we met and many more wonderful artisan food producers of Hampshire visit: www.hampshirefare.co.uk